The Zoostorm Freedom 10-270 is a small netbook PC. A friend asked me to have a look at the 10-270 as the machine would not boot. After doing all the usual checks I decided that I needed to scan the hard drive to see if it was infected. I tried the Microsoft Standalone System Sweeper, loaded on to a USB stick, but it could not find the Windows partition so failed to load. I then decided that the best way forward was to remove the hard drive from the netbook and attach it to my desktop machine where I would be able to scan it easier.

I turned the netbook over to try and find the cover that was hiding the hard drive. None of the covers underneath  had a hard drive beneath them, oh dear! A quick Google led me to this page. So now I knew, to get to the hard drive you have to dismantle the netbook almost completely, oh deary dear!

So are you feeling brave? Then let us begin.
If your netbook is still in warranty then send it back and let them deal with it. If it's out of warranty and you have nothing to lose, have a go, it's the only way to learn you know!

Things you will need
Small Philips screwdriver, I bought this set from Amazon and the do seem quite good.
Small slot screwdriver, mine was in the same set as the Philips.
Good eyesight or a magnifying glass, or probably both!
Anti-static mat and wrist strap is always a good idea when working on delicate electronics.
Something to store an organize the screws that come out.

Method
1. Unplug the charger, if I really needed to tell you that you had better stop now and not read any further.


2. Remove the Battery, two clips hold the battery in. 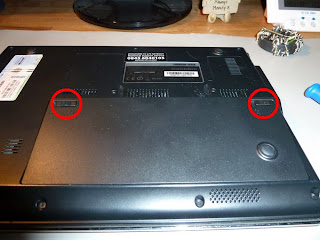 3. Remove the two screws that secure the two small panels above the battery.

4. Remove the two panels. Even with the screws removed you will have to ease the panels off as they are still held with small tabs of plastic.

5. You should now have a netbook that looks like this. 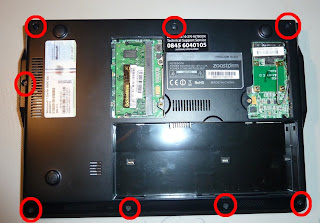 6. You now need to remove the 8 screws from the bottom of the netbook that are circled in red in the picture. The one on the left side is shorter than the other 7 so you will have to make sure you put the correct one back in this position when rebuilding the netbook.

7. Remove the aerial cable from the WiFi card. This should come of if you carefully ease it up with one of your flat screwdrivers. But be careful as it is a very small connector and looks like it can be easily damaged. 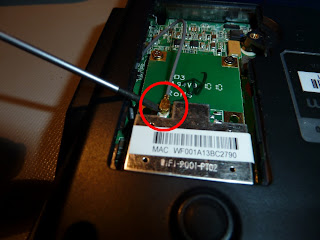 8. Turn over the netbook and open the screen. We now need to remove the keyboard. The keyboard is held in with 3 spring clips that are located above the F2 F8 and Print Screen keys. To release the spring clips insert a flat bladed screwdriver between the top of the F2 key and the plastic body of the netbook. If you are in the right place the clip should release and that part of the keyboard should pop up a little. Repeat for the other 2 clips. 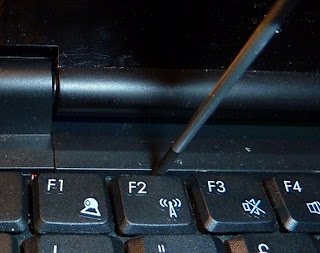 10. Once the keyboard is removed you will then need to release the smaller ribbon cables that are for the touchpad and the LEDs. They are the same type of connectors as the keyboard and require the grey plastic bar rotating upwards like the keyboard connector. 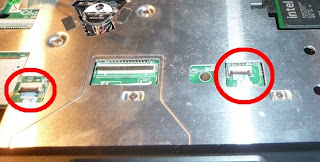 You can see the keyboard connector between the 2 smaller red circled smaller connectors.

11. You now need to remove the plastic covers that are covering the screen hinges. You need to use a flat screwdriver to ease the front of the cover up. When the front is eased up you can tease them off at the back as well. The covers look the same but they are handed, there is some plastic underneath that means that you have to make sure you replace them in there correct place. 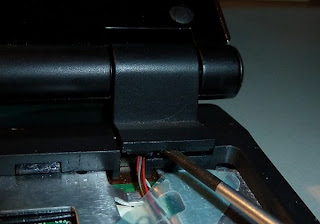 12. You now need to remove the 2 connectors, 1 by each hinge, that come from the screen and connect to the motherboard. These connectors DO NOT have the grey plastic bar and are just push fit together. Tease them apart carefully trying to keep them square as they come apart so as not to damage them. Lift the sticky tape and lift the connector and wiring clear. 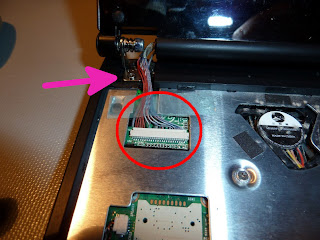 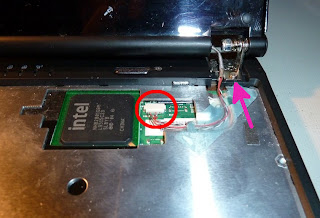 Then you can remove the two screws indicated by the purple arrows, and carefully remove the screen. (Thanks Ruth)


13. Next remove the 6 screws from under the keyboard. 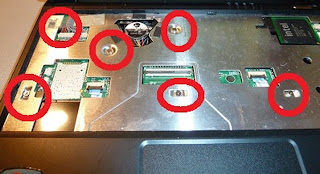 14. Turn the netbook over and look in the battery compartment. You will see 3 plastic clips that need to be released. I used a slightly larger flat screwdriver and using a twisting motion released the clips. 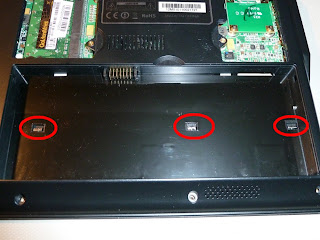 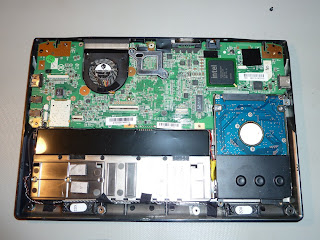 16. The hard drive is located in the bottom right hand corner. It is held in with 4 screws. 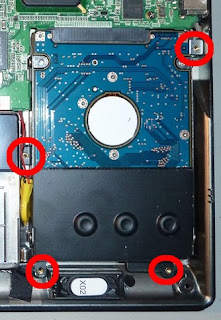 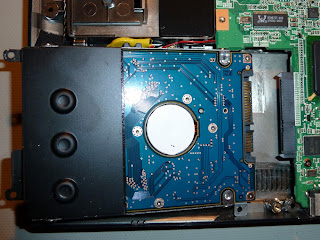 So you now have the hard drive removed ready to replace or scan in another PC. When you have done what you need to do, the refitting and rebuilding of the netbook is the reversal of the removal. However there are few things to watch for:

The yellow package to the left of the hard drive in the last photo (I think it is the CMOS battery) has wires connecting it to the motherboard. Make sure you don't trap the wires when replacing the hard drive.
Make sure you put the correct screws in the right place. You did keep them all separate and note where they came from, didn't you?
Be careful when replacing the screen connectors they are rather small. The wires connecting them are also thin and easily damaged. Remember to put the sticky tape back on to hold the wires down so they don't get trapped.
The ribbon connectors for the keyboard, touchpad and leds can be a little tricky. Make sure they are correctly seated before pushing the grey bar down.
Don't forget to reattach the WiFi cable. You need to route from the top of the netbook after refitting the screen through the hole just to the left of the bigger screen connector. Take care when refitting the cable to the WiFi card that you have it aligned correctly.
So what happened to the hard drive in this machine?
Well after attaching it to my desktop and running the Hitachi diagnostics software on it, the result was the diagnostics were telling me that there was a hardware error due to "excessive shock". So it looks as though it's a new hard drive, but my friend does not have a Windows reinstall disk and did not do any backups of the operating system, because there is no optic drive, when they bought the netbook. So it might be getting a version of Linux installed on it.

There have been a few people posting in the comments asking about the CMOS battery. I did not have to take the battery out when I was dealing with the hard drive, so I was a bit in the dark. Lucky for us, Andy has just replaced his and has posted some extra details:

I just fitted a new one, zoostorm customer services charged £6.60 and it arrived overnight.
It has a keyed plug already fitted.
You don't need to take the hard disk out but you need to get to that stage then remove the plug from top side of the motherboard. If you follow the wired you can see the plug/socket in the corner of the motherboard.
It's a fiddle but you can locate the replacement plug over the socket and lever it into position.
It is keyed so nothing to worry about.
Andy

So it looks like the battery comes as a complete unit including the wire and plug to connect it to the motherboard, it is plugged on the motherboard not soldered and they can be obtained from Zoostorm Customer Service http://www.zoostorm.com/ContactUs.aspx

Andy McDougall posted a comment saying that he had re sited the CMOS battery so that it would be easier to change it the next time it failed. That's a great idea but I also liked the fact that he used some rigid plastic from a supermarket meat tray to insulate the PCB from the re sited battery and holder.

He has sent me some photos and info which I have reproduced below. He has in effect moved the CMOS battery from one side of the notebook next to the hard drive to underneath the cover for the Wi Fi card as shown by the red circle in the picture below. He has removed the original battery holder and extended the wires to the new re sited battery holder. 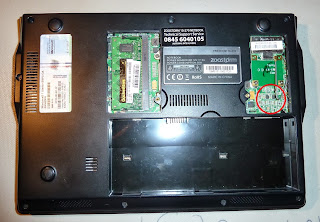 Hi Malcolm,
Attached are the photos I took during the final stages of the battery fix. the first just shows the extension wires linking to the chopped-off ones from the original battery - soldered but not yet sleeved. The second is the holder sitting on the plastic separator, unfortunately a bit skew-wiff and not terribly visible as it is transparent(ish). Conveniently it was possible to cut it with a bit of a flange below the edge nearest to the wifi sub-board, which helps to leave a little air gap above the packages underneath. That's just a bit of magic tape holding it steady. 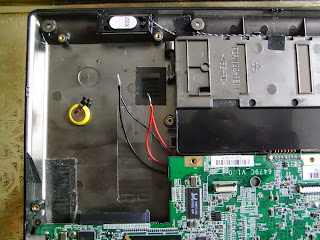 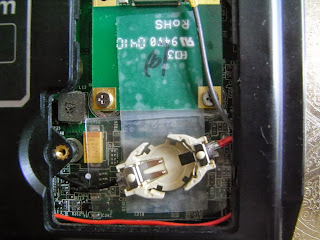 I noticed the Small Battery Company offers a straight replacement complete with leads and connector (http://www.smallbattery.company.org.uk/sbc_cr1225-wr.htm) but it's a rather expensive option at £12.99 compared with [holder + separate cell]. I suppose it might be useful if you don't fancy soldering.

I can strongly recommend Gleave and Co (http://www.gleaveandco.com) for anyone who passes through Farringdon in London, it is only 5 minutes' walk from the Underground and has a dizzying range of button cells at sensible prices, for example £1.20 for a quality Renata CR1225. Beware that they close at 3pm though.

All the best, Andy

A good point from Brian Westlake in the comments, if you are going to replace the CMOS battery with an identical one and not move it like Andy did above, when you remove the old battery, holder and wiring make sure you note which way around the connector is as it is then easier to replace when you know which way around it fits.

Posted by Malcolm Huxtable at 00:46

Malcolm Huxtable
Devon, United Kingdom
From an early age I used to take things to bits to find out how they worked. Later on I even managed to put them back together again. Later still I could put them back together and they would work! Repairing things to get the maximum amount of life from them and avoiding throwing things away and ending up in landfill is why I end up getting PCs to repair. Some people enjoy a cryptic crossword, I do virus infected laptops!!